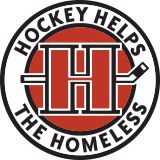 It's so nice to be nice, and everyone deserves a home.

In York Region, it's estimated that 300 to 500 youth between the ages of 13 to 24 are homeless on any given night. On November 17, I will be participating in the Hockey Helps the Homeless tournament, raising awareness and funding for 360°Kids, a local youth support agency in York Region. This annual tournament has raised over a million dollars for the organization.

Thank you so much for considering making a donation.

If you think this page contains objectionable content, please inform the system administrator.